In the narrow cobbled streets just off via del Corso winding through Dante’s Florence, there is an unassuming stone church tucked neatly into the facade of ancient buildings. 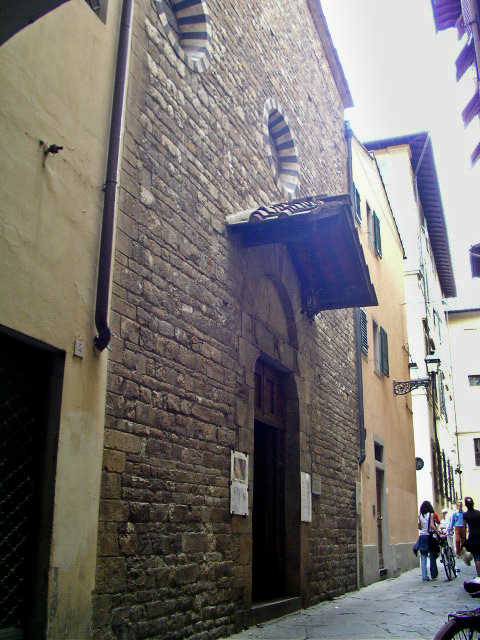 It is the Chiesa di Santa Margherita dei Cerchi, dating back to 1032 and named for the 12th century Cerchi Family. Although the plaque below identifies it as Dante’s church, it is more accurately the church of Dante’s Beatrice. History seems to name the church of San Martino al Vescovo — no longer in existence — as Dante’s family parish.

Some accounts say it is here, in this tiny and shadowed church, where Dante first laid eyes on his muse Beatrice Portinari. Other sources say the first encounter was at her family home.

Wherever they first met, Santa Maria dei Cerchi was certainly the Portinari family church, and is the final resting place for many family members.

“Whereas it is known that Dante, after his exile, was buried in Ravenna, it is said that Beatrice was buried here on June 8, 1291. This may be just a myth, but it has brought popularity to the church and to Florence. A plaque near what is said to be Beatrice’s tomb commemorates her life.” (source)

While it is more likely that Beatrice was laid to rest alongside her husband’s family, as was tradition (the Bardi family, in the cloister of Santa Croce) visitors can still leave a note to Beatrice in a basket near her pietra tombale.

What might one write to Beatrice, were she able to grant the one most important request?

“And often, next to the 14th century tomb slab, you’ll see flowers and hand written notes with messages for Beatrice written by lovers, who like Beatrice and Dante, are unable to live their lives together.” (source)

Dante married another woman, Gemma Donati, in 1295 at this very church. Beatrice married into the wealthy Bardi family and died young, likely in childbirth. But Dante’s love for Beatrice never seemed to falter.

To find the church, follow via del Corso from Piazza della Repubblica and look for the signs to Dante’s Church and Dante’s house. While you are in the area, you may also want to see Casa di Dante, a museum constructed on the site thought to be Dante’s birthplace.

Image credits: top photo (church exterior) from Wikipedia, all other images my own.