If the universe had commissioned Walt Disney to create Italy, what he would have crafted, in my opinion, would have looked like today’s Verona. Verona is that exquisite, and magical.

Apparently I’m not the only one who feels this way. The entire city of Verona has been named one of UNESCO’s World Heritage sites. Often, a UNESCO site is something more specific, such as the church in Milan which houses Leonardo da Vinci’s The Last Supper, or the ancient dwellings known as trulli in Puglia’s Alberobello. Many Italian cities, such as Florence, Siena and Naples, do find themselves on the heritage list, but it is specifically for their historic city centers (i centri storici). In Verona, the UNESCO powers that be found the city’s urban structure and architecture so captivating, that they honored the entire city with World Heritage status.

Falling in love with Verona is easy, possibly unavoidable. You only have to do one simple thing: go there.

A Quick Introduction and Brief History

Verona sits along the Adige river in the northeastern section of Italy, in a region known as the Veneto. A city of 265,000 people, Verona is easily accessible by train from many of Italy’s popular cities, including Milan, Florence and Venice.

Records show that Verona existed as a settlement as early at 550 BC, and became a Roman colony in the first century BC. After being conquered several times (including by Charlemagne) Verona came to be ruled by the Scaligeri family in the 1200s. The city experienced a couple of centuries of peace and prosperity, and hosted some heavy hitters of Italian history (Petrarch, Giotto and Dante), but eventually fell under Venetian rule in the 15th century. That changed in 1797 when Napoleon came through town, and Verona was ultimately turned over to Austria. In the 1860s, Verona came under Italian rule once again when all of Italy was unified.

Things to Do in Verona

As the setting for three Shakespeare plays, (Romeo and Juliet, The Two Gentlemen of Verona, The Taming of the Shrew), certainly the most notorious attraction for visitors is La Casa di Giulietta (Juliet’s house). It’s easy to find — just follow the crowd winding through the picture perfect marble streets. We made an obligatory visit there, fighting the tangle of tourists to glimpse Juliet’s balcony and bronze statue with the breast polished to gleaming. Legend has it that touching the breast of Juliet’s statue brings good fortune in love.

Piazza Brà and the Roman Arena

Walking from the train station into the history center (centro storico) really felt like walking down Disneyland’s Main Street. You couldn’t miss this amazing piazza with its imposing Roman ruins even if you tried! The Roman arena is still in use today as a venue for opera performances.

For more Roman remnants, there is a Roman theater across town.

This literally translates as the “Square of the Herbs”, which may explain, in an indirect way, the many street vendors which filled this square. This part of town was vibrant and full of energy, and we loved wandering the stalls (bancarelle) with their offerings of irresistible Italian trinkets.

It wouldn’t be a thorough visit to an Italian city without admiring una chiesa o un duomo (a church or cathedral), and Verona has a few to offer. There is the main cathedral, pictured below. Other churches include San Zeno Maggiore, Santa Anastasia, San Fermo.

In what appears to be the center of the historic town, situated along the Adige is the old castle and bridge, an impressively preserved fortification. We loved wandering through here, exploring the Ponte Scaligero and Museo di Castelvecchio. The views from the bridge were incredible. 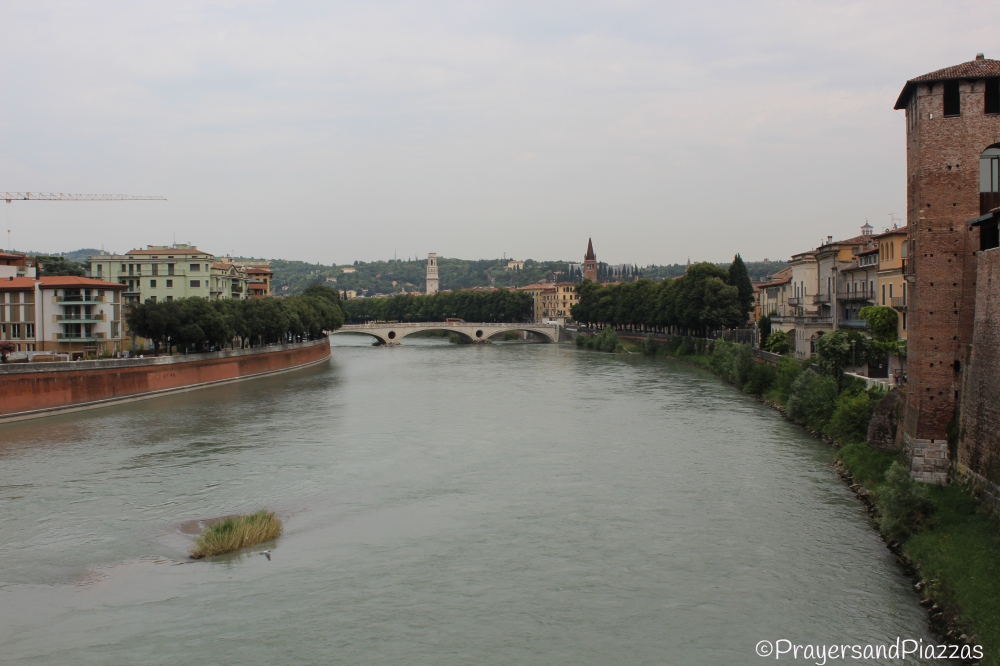 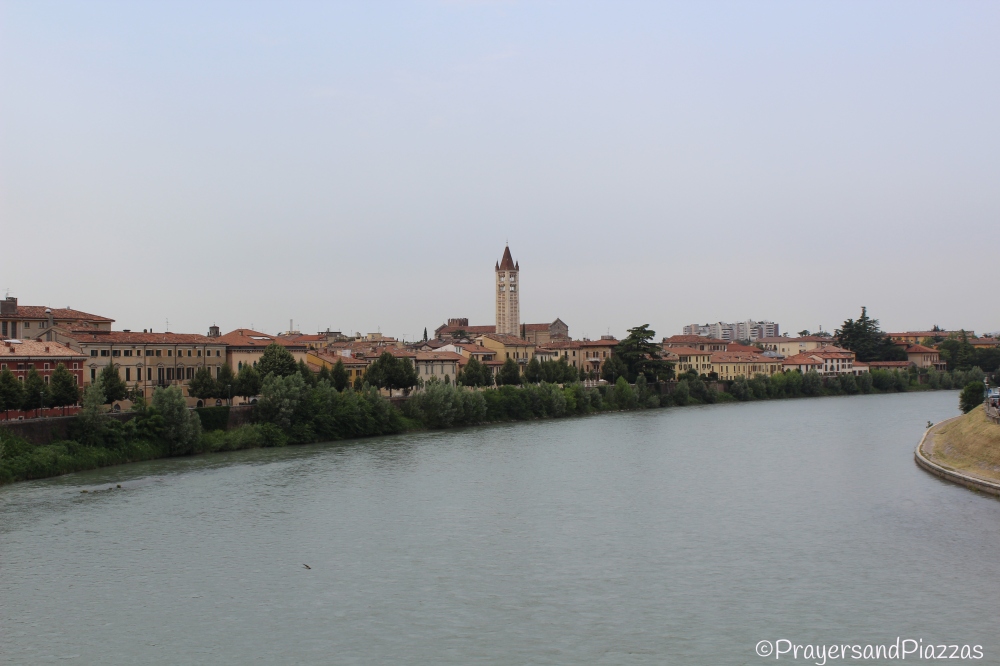 Departing from Piazza Brà is a little train on wheels which circles through the town. Although we decided to meander Verona using our own steam power, this seems like a fun way to get an overview, especially with little ones.

We did, however, cross over the Ponte Scaligero and make our way to Piazza Arsenale, where there was an expansive, shallow and peaceful fountain. I had read that kids enjoyed playing in this fountain, and Daughter was delighted to discover that I had packed her bathing suit (costume da bagno) for this very reason. It was an excellent way to re-energize after our lengthy passeggiata (stroll) through the city and before the walk back to the train station.

Very close by is Lake Garda, the largest lake in Italy and a popular vacation spot. The southern end of the lake is just 15 miles from Verona, and easily accessible by bus. Venice is nearby as well, about an hour by train or car. We took a day trip from Florence, which was and easy 1.5 hour train ride.

With only a handful of hours in Verona, we left with plenty undiscovered. I tucked the tourist map into my pocket in the hopes that, some day, I’ll find myself again wandering this exquisite city.