Staying in the heart of Rome this summer, just due passi (“two steps”) from the center of the old empire, one word comes to mind: ancient.

Leading directly to the center of ancient Rome is the Via dei Fori Imperiali, which can be translated as the Road of the Imperial Courts. This road stretches from Piazza Venezia to the Colosseum.

Rather than being constructed by ancient Romans, as I had imagined, this road was built in the early 1930s under fascist dictator Benito Mussolini, in order to celebrate the splendors of the ancients. For the past 25 years, archeologists have been actively excavating along both sides of the road, hunting for the Imperial Roman relics which lay beneath.

Above: I love the juxtaposition of the connected structures above, old versus new. Below: Two of the ancient arches which sit in the shadow of the Colosseum. The first is the Arch of Constantine, the second is the Arch of Titus. (Timeless Italy has a great read on the arches of Rome, click here to read it!) 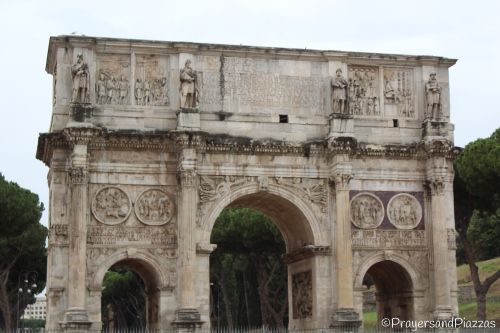 Waiting at the end of Via dei Fori Imperiali like a majestic ancient treasure is the Colosseum, too iconic for me ever to be missed on a visit to Rome.

Also known as the Flavian Amphitheater (for the Flavian dynasty emperors who ruled at the time), it was constructed in AD 72 and is the largest amphitheater ever built.

“The Colosseum could hold, it is estimated, between 50,000 and 80,000 spectators, having an average audience of some 65,000; it was used for gladiatorial contests and public spectacles such as mock sea battles (for only a short time as the hypogeum was soon filled in with mechanisms to support the other activities), animal hunts, executions, re-enactments of famous battles, and dramas based on Classical mythology. The building ceased to be used for entertainment in the early medieval era. It was later reused for such purposes as housing, workshops, quarters for a religious order, a fortress, a quarry, and a Christian shrine.” (source)

I have also read that in the day it had retractable ‘sails’ along the top of the structure to help protect spectators from the sun.

Above: A cross-section of the Colosseum, featuring just a handful of the estimated four million people who visit every year. Below: There are a few theories on why the walls of the Colosseum are riddled with holes. Some could have been created where the builders attached their scaffolding, others are likely from vandals of days past, wanting to get to the stone and iron used in construction. 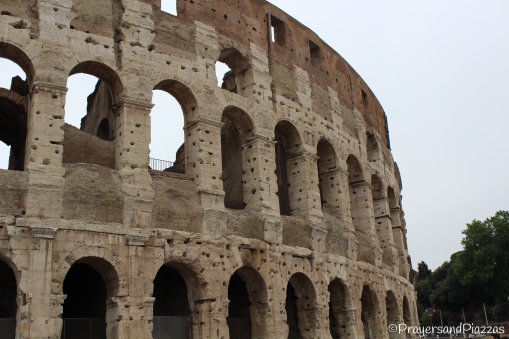 Above: Look carefully to the right and very back of the photo, and you can see the Colosseum watching over its neighbors. Below: Daughter takes in the view of the ancient remains of the Roman Forum. 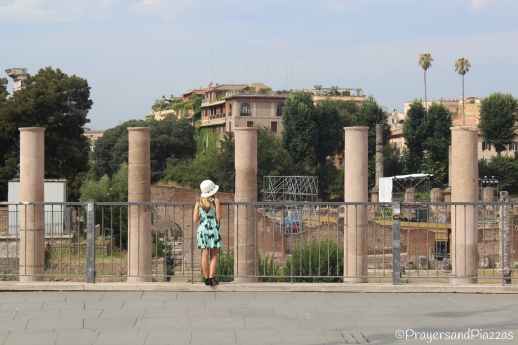 More RomeLove on this site: Keep Calm and Love Roma, A Roman Sidestreet, And Behind This Curtain…, or read my essay on how I fell in love with Italy and Italian: Accidental Italian.

For the coming months, while crafting new content, Prayers and Piazzas will be featuring our most popular posts from the archives. We hope you enjoy these favorites while we are creating new material. This post first appeared on Prayers and Piazzas in October 2016, in response to The Daily Post’s one-word prompt: Ancient.

Leave a Reply to a mindful traveler Cancel reply