“I never weary of great churches. It is my favorite kind of mountain scenery. Mankind was never so happily inspired as when it made a cathedral.”

Like many who have fallen for Italy, I too never weary of churches. I am not shy in professing my love of all things Duomo, but, a dire la verità (to tell the truth), a church doesn’t have to be especially grand to steal a piece of my heart. This is the second post in a two-part series. To read part one, please click here.

The Medici was essentially, Florence’s first family for roughly 300 years. Lorenzo is likely the most recognizable name of the dynasty. Also known as Lorenzo the Magnificent (Il Magnifico), he is credited as the most enthusiastic supporter of the Renaissance.

“Lorenzo’s court included artists such as Piero and Antonio del Pollaiuolo, Andrea del Verrochio, Leonardo da Vinci, Sandro Botticelli, Domenico Ghirlandaio and Michelangelo Buonarroti…. Although Lorenzo did not commission many works himself, he helped these artists to secure commissions from other patrons. Michelangelo lived with Lorenzo and his family for five years, dining at the family table…” (source)

It seems only fitting that the dome which graces the Cappella dei Principi (Chapel of the Princes) of the Basilica of San Lorenzo, is a miniature of Florence’s “other” dome.

The complex of San Lorenzo includes the basilica itself, the Medici Chapels, and the Laurentian Library (designed by Michelangelo). The chapels are the final resting place of many Medici family members, including Lorenzo and Anna Maria Luisa, with whom the bloodline ended.

As for the church of San Lorenzo, it is said to be one of the oldest in Florence, dating back to 393 and a time when the structure was beyond the walls of the city. Centuries later, in 1419, reconstruction began with a pledge from Giovanni di Bicci de’ Medici, the family patriarch who founded the Medici bank. 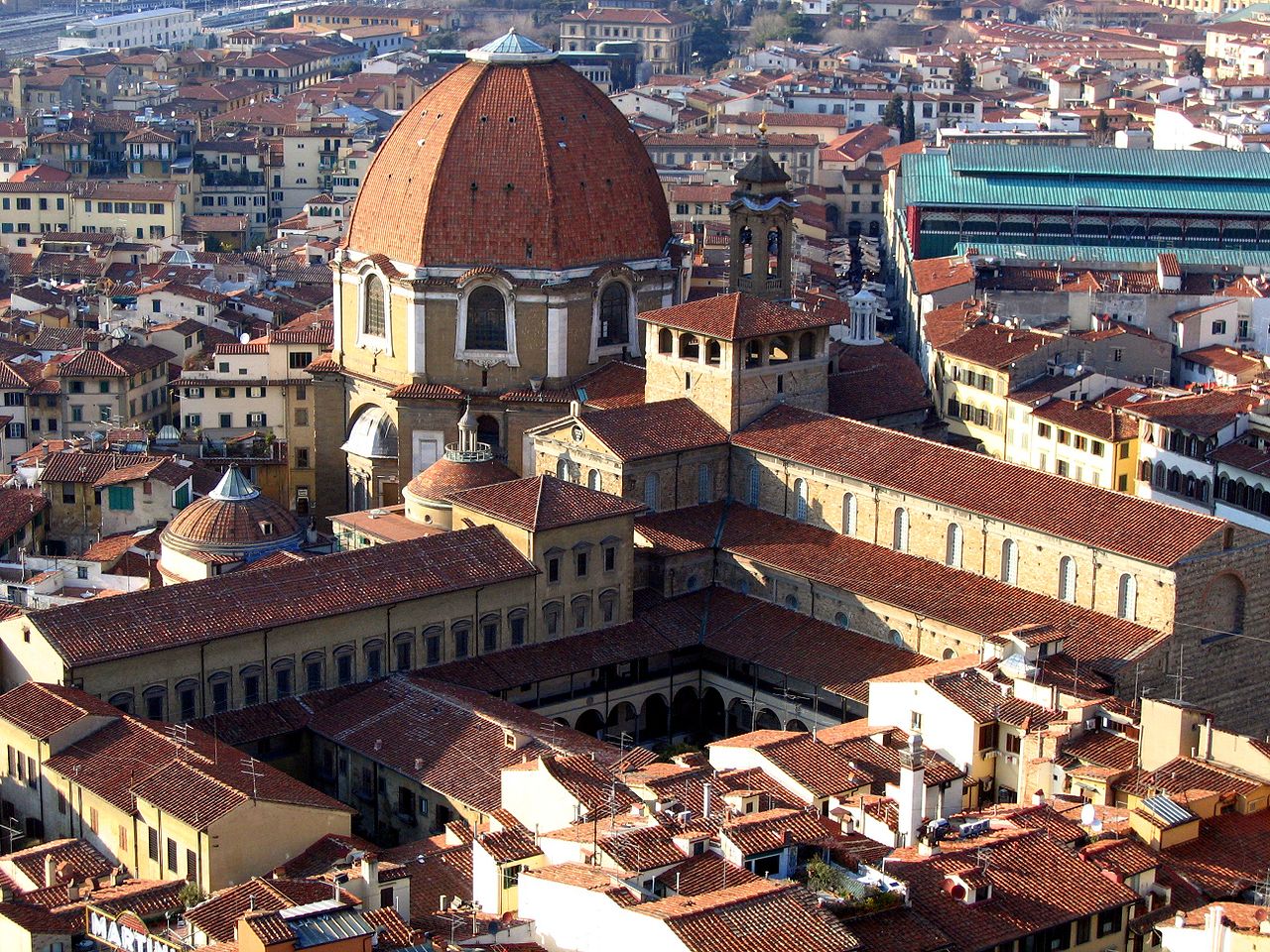 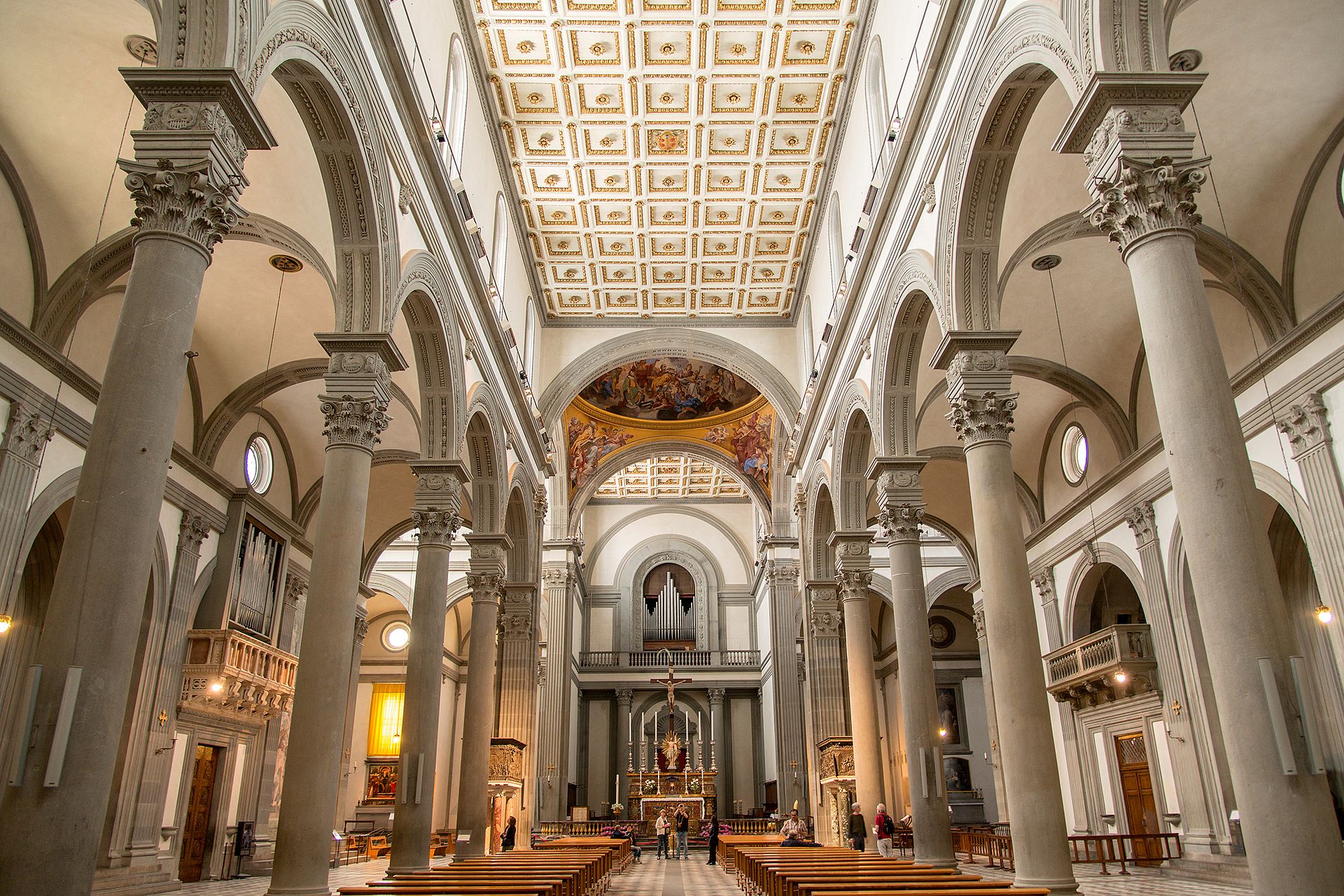 Noteworthy: The basilica is in a bustling district of the city, not far from the Duomo and in the heart of all things Medici. If you find yourself in Florence with a few extra hours, there is plenty to see in this part of town. Since San Lorenzo was the Medici family’s neighborhood parish, just across the way is their former home, Palazzo Medici Riccardi, now a museum open to the public. Not to be missed is the Mercato Centrale, the Central Market, a lively food hall with every type of local offering, including produce, olives and oils, spices, meats and wines. For a different type of shopping, the open air San Lorenzo market (just outside of Mercato Centrale) is irresistible. It features stalls and stalls of leather goods such as bags, belts, journals and other suitcase-sized Florentine mementos.

Time travel seems possible in Florence. Getting to the Renaissance is easy — just wander down any Florentine street. To travel back even further, to a place more medieval, get to San Miniato al Monte. 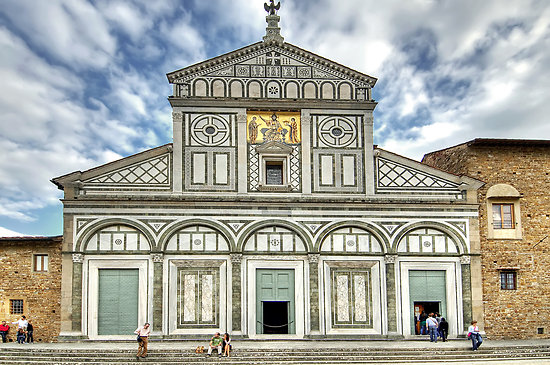 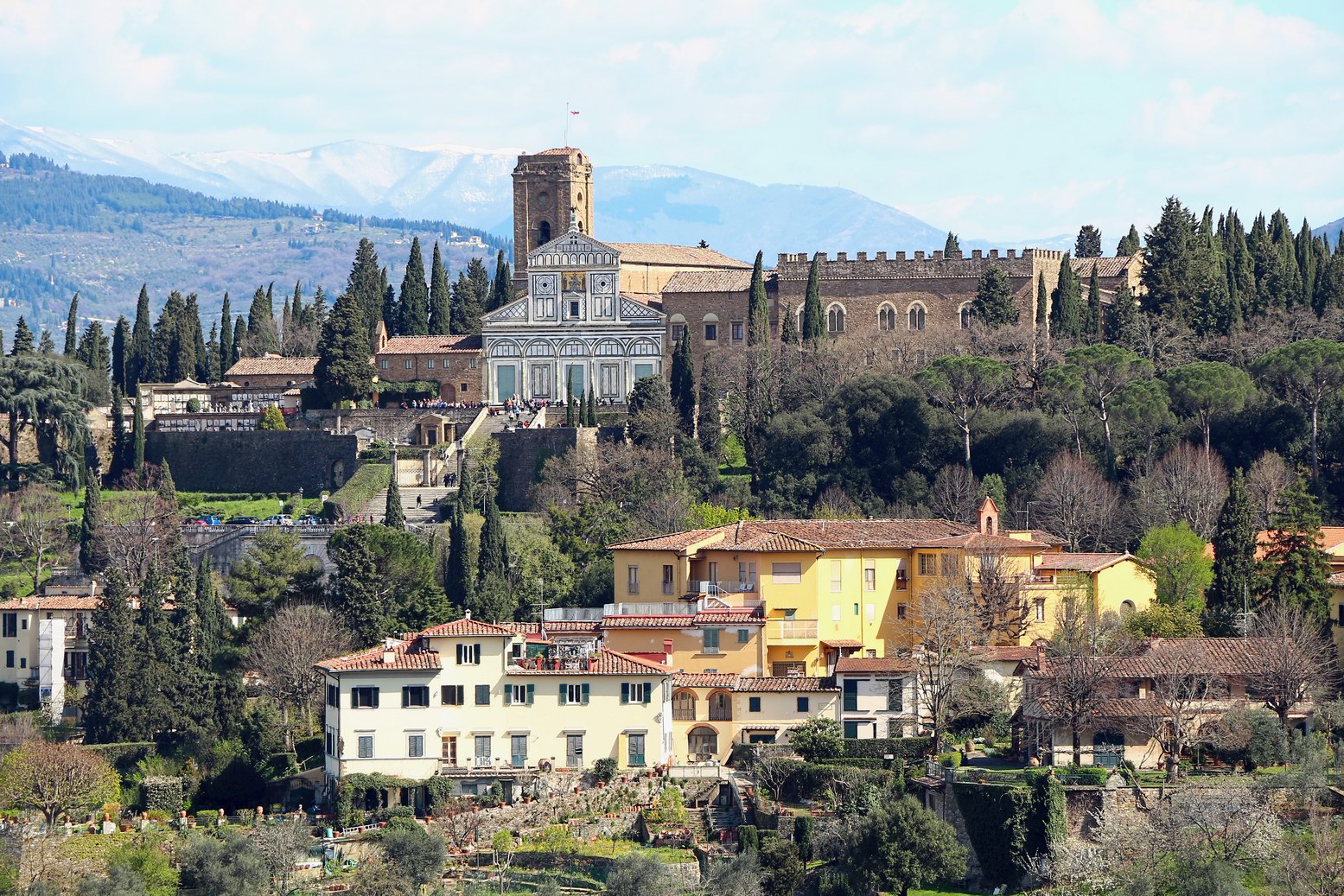 This Roman Catholic church, built in 1013 is, quite simply, majestic. I could paraphrase for you but Wikipedia says it best:

“San Miniato al Monte (St. Minias on the Mountain) is a basilica in Florence, central Italy, standing atop one of the highest points in the city. It has been described as one of the finest Romanesque structures in Tuscany and one of the most scenic churches in Italy.” 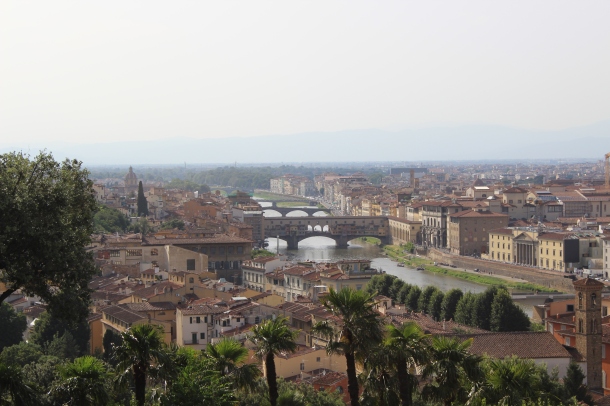 I might have left the grounds of San Miniato without even entering the church, happy and drunk from the soaring view. Thankfully, I was drawn inside. 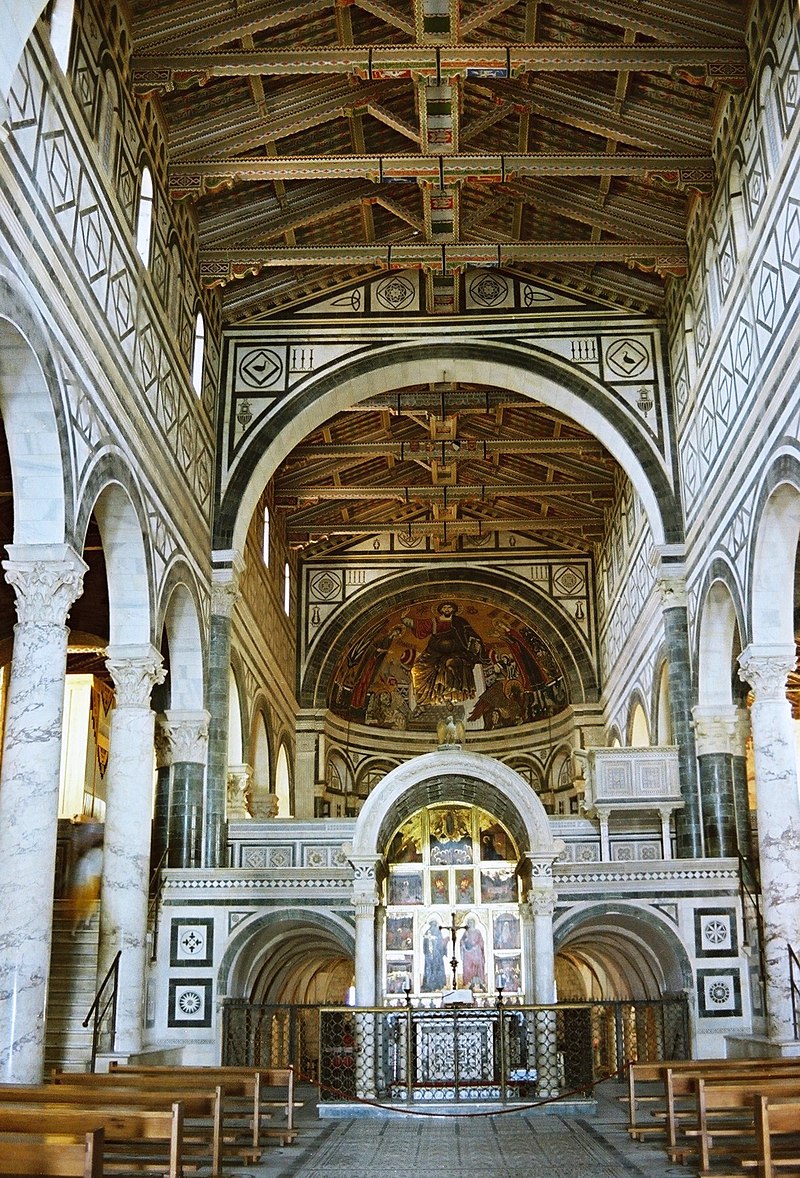 Daughter and I, without any advanced planning, had wandered into the church on this summer afternoon around 5:30 pm (17.30 in Italian time), which happens to be when Gregorian chant takes place from the raised choir atop the arches in the photo above. Behind the iron gate rest the relics of Saint Miniato. Combined with the dim light, fading frescoes, patterned pavement from the early 1200s and surrounded by an interior which has changed little since its beginning, the feeling was quite mystical. I felt transported.

My well-worn Frommer’s guide of Florence concisely provides a most fitting description of San Miniato: “the most spiritual of Florentine churches is one of the city’s truly ancient places.”

Noteworthy: Sharing the grounds of the church is a monastery, which has been run by the Olivetans since the 1373. From their shop on site are products crafted by the monks, including honey and herbal teas. On Sundays, Feast Days and summer weekdays, the monks join in on the mass with their Gregorian chants. If you have made it up to the basilica, you may want to (safely) cross the street and wander to Piazzale Michelangelo, which is especially breathtaking at sunset.

Interesting: During the siege of Florence in 1530, San Miniato al Monte was used as an artillery post by the defenders and Michelangelo had the church wrapped in mattresses to protect it from enemy fire. (source)

Across the river from Florence’s historic center, in the San Frediano neighborhood, is Santa Maria del Carmine, home of the Brancacci Chapel.  This church is bit off the typical visitor’s path but worth the journey, especially if you are already in the Oltrarno district.

The church dates back to 1268, built for the Roman Catholic Carmelite convent, still active today. Most of the church was destroyed by a fire in 1771, which was rebuilt shortly thereafter in the Rococo style, which I find interesting to see in Italy. 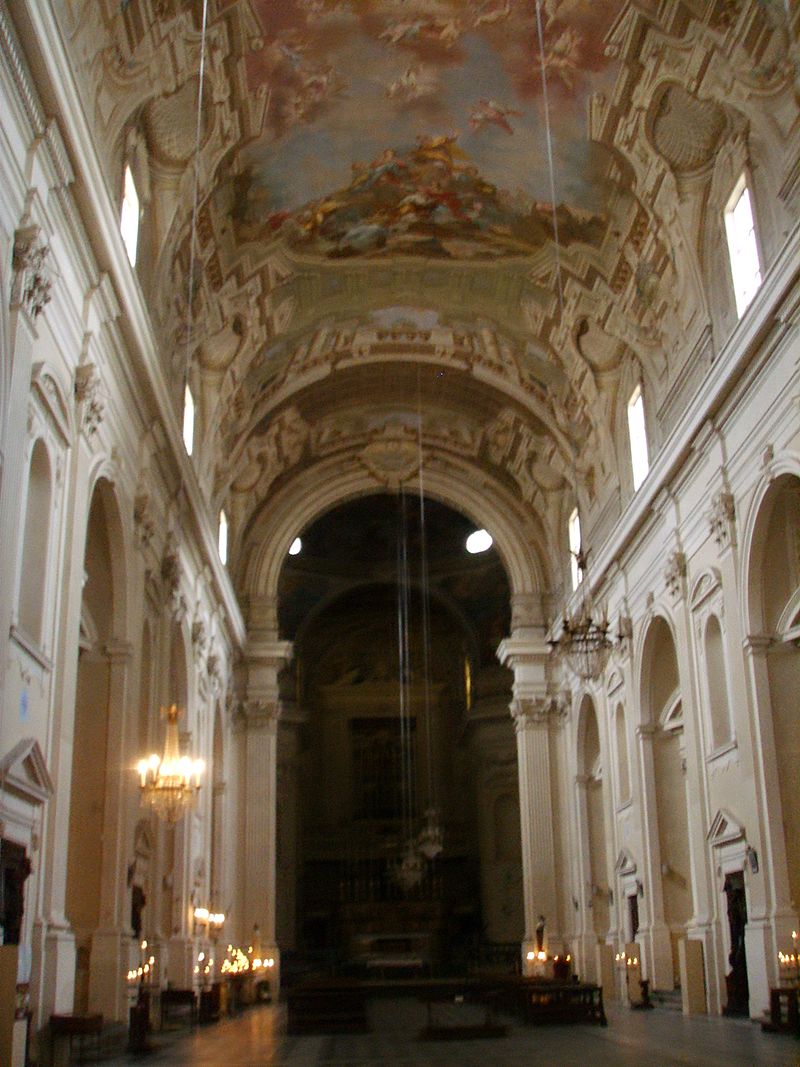 Thankfully, the Corsini and Brancacci chapels survived the flames.

Felice Brancacci was a Florentine silk merchant born in 1382. Somewhere around 1423 he commissioned Masolino di Panicale to paint the chapel passed along to Brancacci from his uncle. But Masolino was called away to be painter for the king of Hungary, and the work fell to his 21-year-old associate, Tommaso di Ser Giovanni di Simone, or as we remember him today, Masaccio. The young artist created a cycle of the life of Saint Peter, patron saint of the Brancacci family, earning the chapel the nickname the “Sistine chapel of the early Renaissance.”

Although I was frustrated at not having closer access to the chapel and larger church, I highly appreciated the brilliance of this tiny chapel. (When I visited, the church was roped off completely — you could see it from the chapel viewing area but could not wander through).

While in this neighborhood, you will want to spend some time in lively and lovely Piazza Santo Spirito and its namesake basilica, a church which I have yet to explore (!).

Image Credits: photo two, photo four; others my own.

Back in the historical center, in the narrow cobbled streets just off via del Corso winding through Dante’s Florence, sits an unassuming stone church tucked neatly into the facade of ancient buildings. 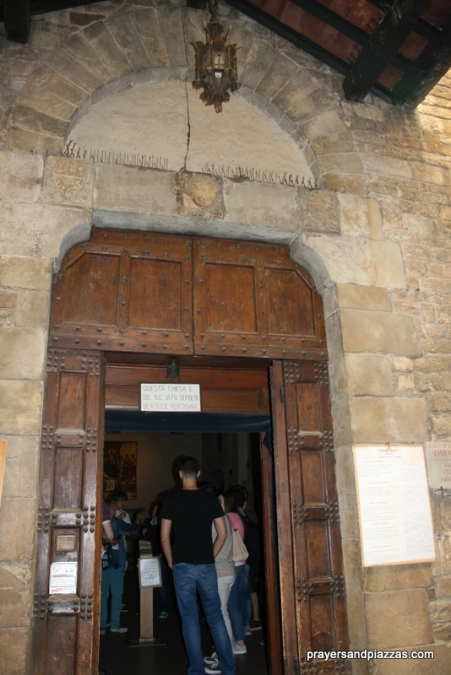 It is the Chiesa di Santa Margherita dei Cerchi, dating back to 1032 and named for the 12th century Cerchi Family. Although the plaque below identifies it as Dante’s church, it is more accurately the church of Dante’s Beatrice. History seems to name the church of San Martino al Vescovo — no longer in existence — as Dante’s family parish. 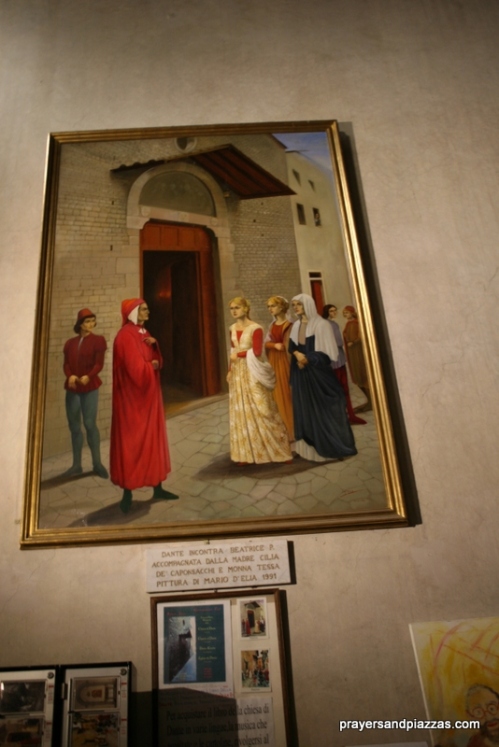 Some accounts say it is here, in this tiny and shadowed church, where Dante first laid eyes on his muse Beatrice Portinari. Other sources say the first encounter was at her family home.

Wherever they first met, Santa Maria dei Cerchi was certainly the Portinari family church, and is the final resting place for many family members.

“Whereas it is known that Dante, after his exile, was buried in Ravenna, it is said that Beatrice was buried here on June 8, 1291. This may be just a myth, but it has brought popularity to the church and to Florence. A plaque near what is said to be Beatrice’s tomb commemorates her life.” (source)

While it is more likely that Beatrice was laid to rest alongside her husband’s family, as was tradition (the Bardi family, in the cloister of Santa Croce) visitors can still leave a note to Beatrice in a basket near her pietra tombale.

What might one write to Beatrice, were she able to grant the one most important request?

“And often, next to the 14th century tomb slab, you’ll see flowers and hand written notes with messages for Beatrice written by lovers, who like Beatrice and Dante, are unable to live their lives together.” (source) 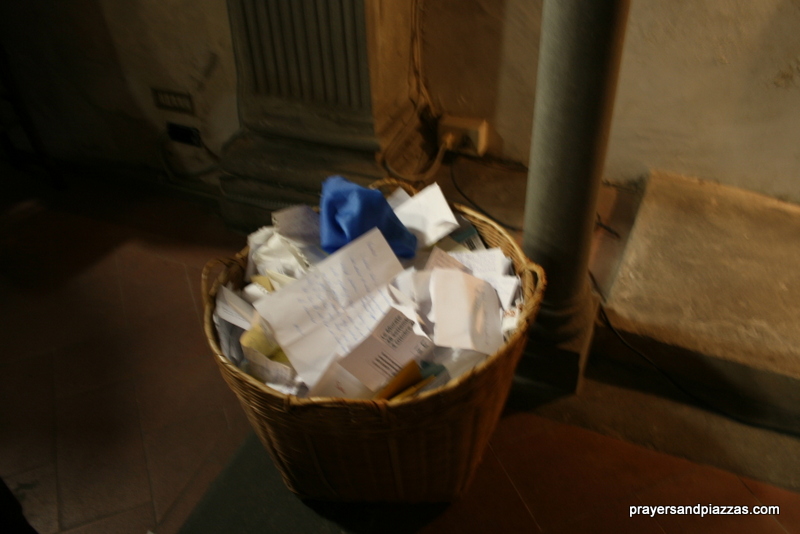 Dante married another woman, Gemma Donati, in 1295 at this very church. Beatrice married into the wealthy Bardi family and died young, likely in childbirth. But Dante’s love for Beatrice never seemed to falter.

To find the church, follow via del Corso from Piazza della Repubblica and look for the signs to Dante’s Church and Dante’s house. While you are in the area, you may also want to see Casa di Dante, a museum constructed on the site thought to be Dante’s birthplace.

You may notice some familiar churches are strangely missing from my list (Santo Spirito, Ognissanti, Santissima Annuziata). These are love stories yet to be written, as they are still on my wish list. As much as I enjoy the more “famous” churches, I also love discovering the lesser known churches, smaller churches which many of you have likely discovered during your Italian travels.

Please, let me know, what else is waiting for me to fall in love with?

For those of you smitten with Florentine churches as am I, you may enjoy this comprehensive site: The Churches of Florence.