“And now abide faith, hope, love, these three; but the greatest of these is love.”

In the early first century Paul the Apostle Paul — one of the original followers of Jesus — was executed in Rome by order of Roman emperor Nero. After he was beheaded, a shrine built up by Paul’s followers on his burial site, located about two kilometers outside of Rome’s Aurelian walls. Early Christians visited this shrine, or cella memoriae, to honor Paul.

A few hundred years later in 324 Emperor Constantine built a small church on this sacred site, which, in the following centuries, expanded in size and importance.

Today the Basilica of Saint Paul Outside the Walls stands majestically as one of Rome’s four ancient papal basilica’s, along with Saint Peter’s Basilica, Saint John Lateran Archbasilica, and Basilica of Santa Maria Maggiore. 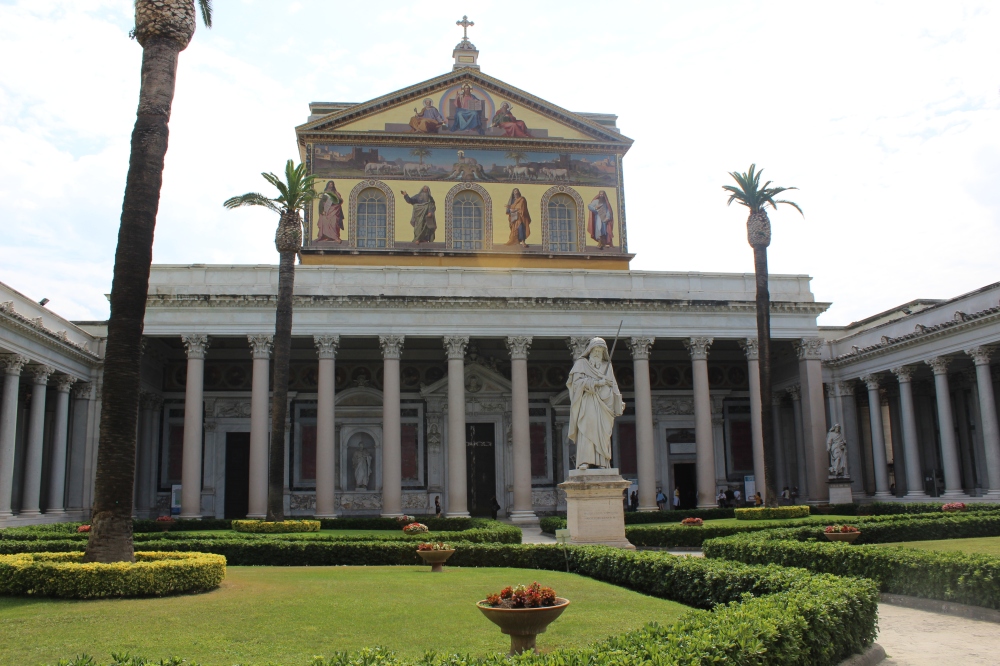 Rome was hectic and hot on this July day, but after a quick ride from the Colosseum stop on the city’s underground metropolitana, we emerged outside of the city walls, far from the fray of summer tourists and into a large, sparse block dominated by this enormous and elegant sanctuary.

My traveling companions were my cugini italiani (Italian cousins), who had long wanted to visit the basilica and were, like me, seeing it for the first time. They talked me through some important highlights of this UNESCO World Heritage site.

Each of the four major basilicas in Rome has a holy door, which are typically sealed by cement from the inside. A simplified explanation is that passing through a porta santa helps in the forgiveness of sins, but these sacred doors are only opened during Jubilee years as designated by the Pope.

Now, here’s where my Italian translation gets a bit murky, but the way I understood my cugino’s explanation was that Pope Francis, in 2015, ordered these doors to remain open. (Wikipedia tells me it’s in honor of the Extraordinary Jubilee of Mercy, which runs from December 8, 2015 – November 20, 2016, “a period for remission of sins and universal pardon focusing particularly on God’s forgiveness and mercy.”)

This seemed to make sense because the door was open, and, after covering up properly (no exposed knees or shoulders, please), we entered the basilica via La Porta Santa. I’m not sure if my slate was automatically wiped clean by doing this, but I did feel like I was leaving behind some of my “baggage”, so to speak, and crossing into a more pure and spiritual place, both physically and metaphorically. 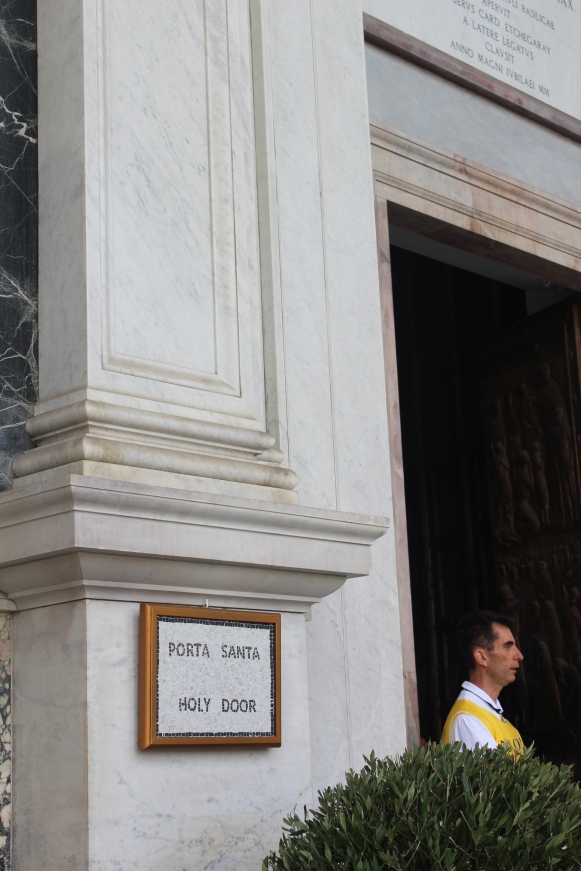 Filled with brilliant sunlight, art and architectural features covering every possible surface, this basilica, simply put, is breathtaking. Although much of it was destroyed by a fire in 1823 (and then heavily reconstructed), the church retains its original design of one nave and four aisles, and is the second largest in Rome, behind Santa Maria Maggiore. 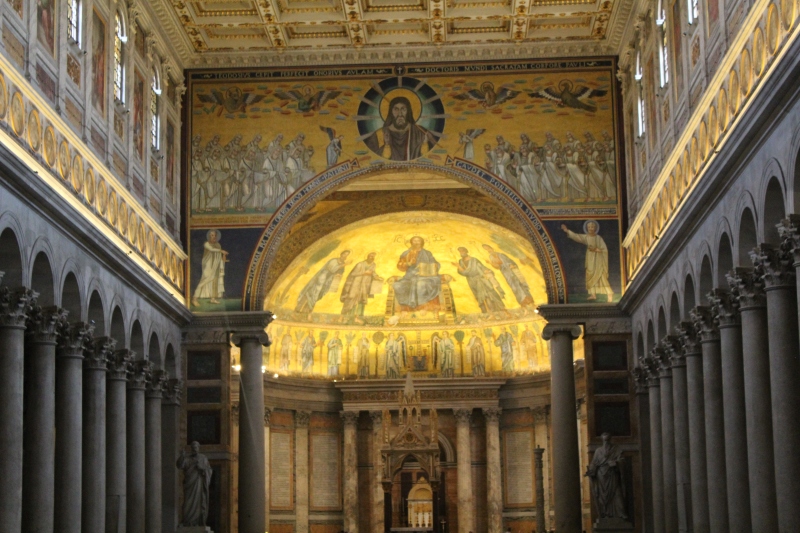 Look closely at the photos above and in the section above the arches you will see long rows of round portraits, one for each of the 266 popes throughout history. Below you see Pope Francis, with a blank spot next to him. There are only six empty circles remaining, built into the church’s architecture and awaiting popes yet-to-be-named. Word has it that it’s a sign of the world’s end once all spots are filled.

Below are thought to be the prison chains used on Saint Paul before his execution. Encased nearby are his remains. In 2009, scientific evidence confirmed the validity of Saint Paul’s remains. (Read more here) 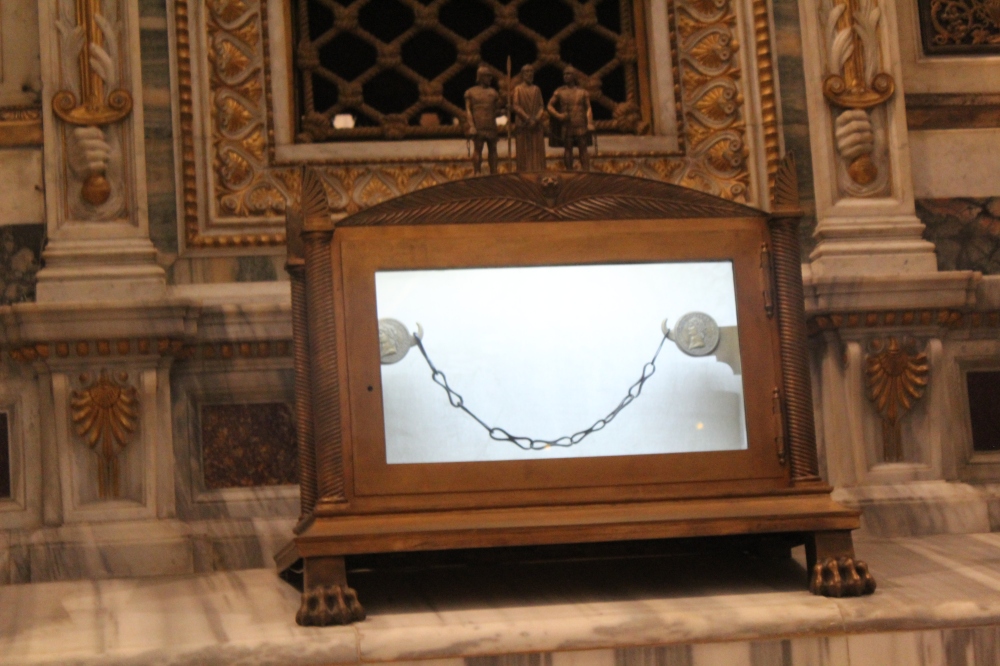 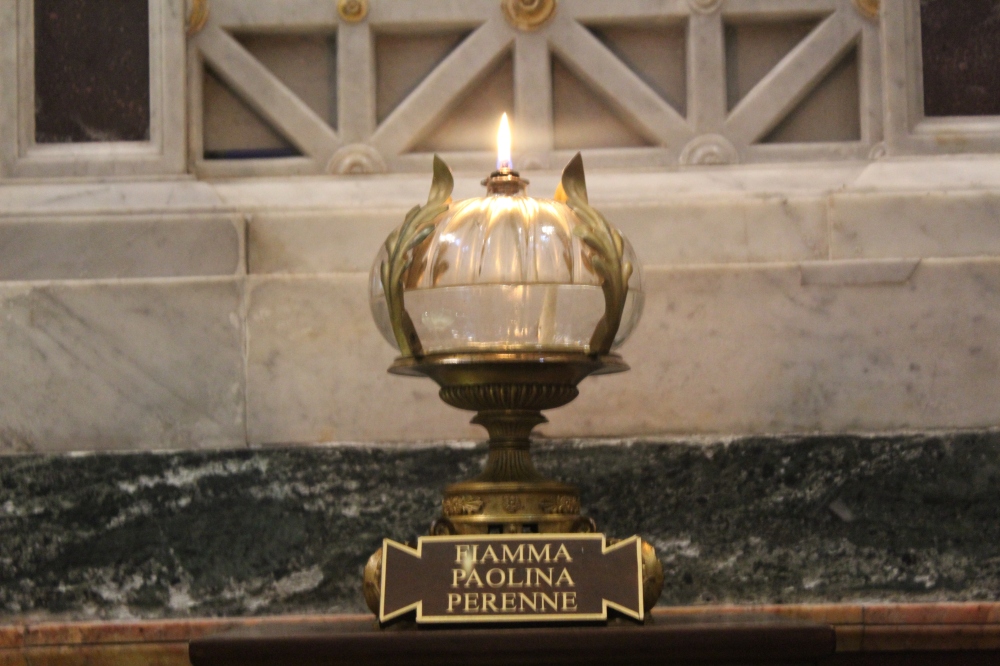 Juxtaposing the majestic interior was this little stone section of the basilica, filled with natural light and featuring this beautiful artwork. Even though I was surrounded by history, something about this more simple construction and crumbling artwork pulls me back in time. 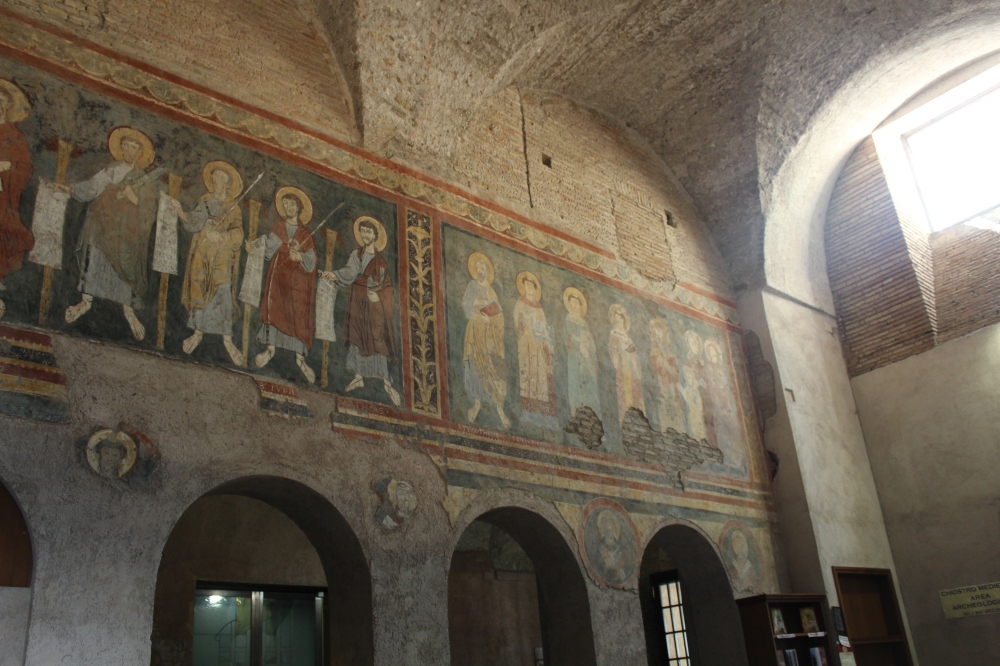 Saint Paul Outside the Walls would never have been on my list of things to see in Rome, what with only ever having a limited amount of time and needing to check off the more infamous tourist sites. But seeing this basilica is one of my very special memories of Rome, and if you have room in your itinerary, you may want to devote a few hours to explore this historic site. I’m thankful I did. (Grazie, cari cugini, per una giornata indimenticabile!)

Visitor Notes: Saint Paul Outside the Walls is open daily from 7 am – 6:30 pm. Entrance is free but there is a charge to see the picture gallery, chapel of relics and cloister. Audio guides in English or Italian can be rented at the ticket window. Get there via Metro Line B (Basilica San Paolo stop) or on Bus 271 or 23. (Source)