It’s not often that a little bear comes into your life and steals your heart. But that’s exactly what happened with this spotted guy, Bear Bear. From the moment my newborn daughter and this newly acquired “stuftie” found each other, they were smitten, and inseparable. 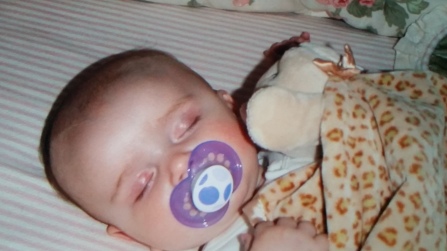 I must admit, there was a little matchmaking involved.

With this velvety creature,  I hatched a plan: this little bear would be a sleeptime-only lovey.

Brilliant! Inside, I felt proudly smug, and knew this was sure to work like magic. After having two boys who were not the best sleepers for years, I felt certain that Bear Bear was the answer.

And, much to my delight, the math really did work out. For a while. Until Daughter (who, turns out, was just a good and frequent napper), got a little older, and demanded Bear Bear with her outside of the crib. At. All. Times. Whether or not there was sleep involved.

Soon enough, one was never without the other. Which was wonderful for the two of them, loving each other so much, and so happy together. But it put tremendous pressure on me, mommy of three, constantly on the run with older kids and Baby Girl (and Bear Bear) in tow.

Now instead of just wrangling the boys with their baseball-soccer-basketball-backpacks and Baby Girl with her stroller-diaper bag-everything else one needs for a baby — there was also the fourth child stuffed animal. Without whom Baby Girl broke into sobs and tears. Particularly if, per chance, while out and about, any number of possible tragedies were to befall Baby Girl, such as dropping her cookie, or suffering a tiny bump or scrape or heaven forbid, anything that might cause a droplet of blood to appear outside her body.

I have had a couple of full-blown panic attacks related to Bear Bear. There was the time when Daughter was three-ish, and we went shopping for a new stroller. You know, for bigger girls. Girls who sometimes sneak Bear Bear out of the car and into the store, and then don’t notice that he’s been dropped in the stroller aisle. Girls who only realize he’s gone missing when, on the very short drive home, they become fatigued, and naturally want their poppy-flier (pacifier) and Bear Bear. Girls whose mom tries to safely steer the car home with one hand while using a yoga stretch with the other, blindly searching the entire back seat of the car for oh my gosh where is Bear Bear? @#%! I think he’s laying on the floor in the stroller section at Babies-R-Us!! (my words, not hers). A quick pull over and frantic call to the store revealed, indeed, Bear Bear had been found and retrieved, and would we like to come get him right now?

There was the time I feared that he was lost somewhere between the hotel room and the Pacific Ocean surrounding Maui. (He was found just inside the threshold of the hotel room, locked safely inside while we were away for hours, me worrying during all of them). And the time when he simply vanished the day before our family trip to Europe. I tore apart Daughter’s room and even called the parking attendant at our local beach, thinking he might have fallen from the car during our visit that summer day. How could we survive the plane ride across two continents and an ocean much less two weeks of intense travel without him? Even Amazon Prime, with its extensive reach, could not come to my rescue, for it was too late to order a copy and try to sneak in the duplicate. Alas, we found him, late that night, in the hamper full of stuffed animals where Bear Bear is never.

One day, Daughter came to me, dejected and sad. “Bear Bear lost his smell,” she announced, all frowny-faced and downcast eyes. My stomach dropped. Was this the beginning of the end? After all, he had recently lost his special tag which Daughter so loved scratching on her tender cheek and his mouth was starting to unravel.

But again, my fears were unfounded. I told her I knew the secret, and, saying a silent plea for success, tossed Bear Bear into the washing machine. After Daughter plucked him, freshly laundered and warm from the dryer, she proclaimed that His Scent Had Returned. He smelled like himself again! Disaster averted.

That year when Daughter refused to be photographed without Bear Bear, circa 2008

Years have passed. Bear Bear has been a faithful and constant companion in our lives. I now think of him as a Family Heirloom, and feel a responsibility as his adult guardian. I hope he knows how much he is loved and cherished. And not just by a little girl.